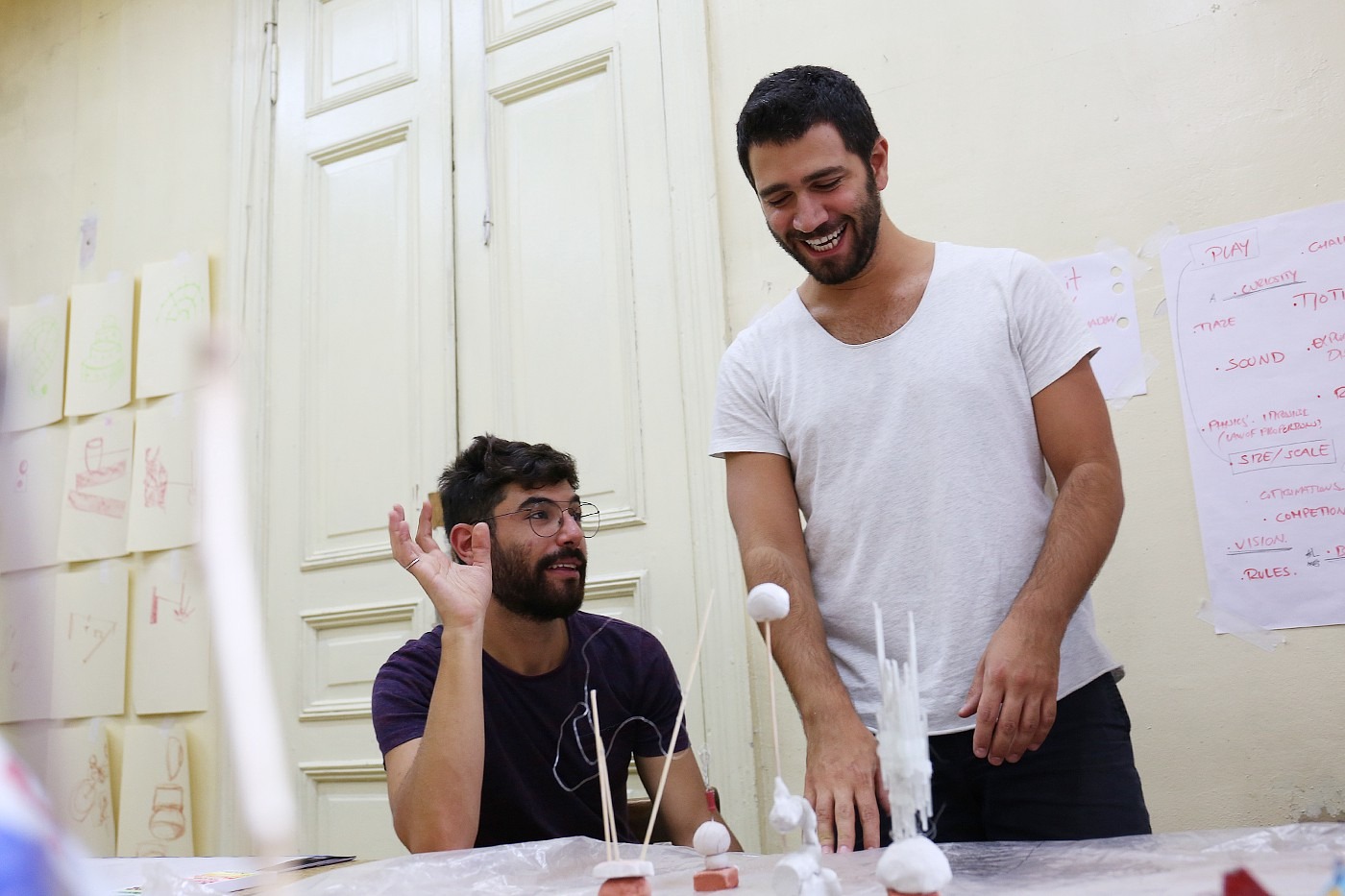 Ameeting at the American University of Beirut, a joint internship in Basel and a shared admiration for the work of Isamu Noguchi brought Ghaith Abi Ghanem and Jad Melki together to form Ghaith&Jad, an architecture studio based in Beirut. They were recently in Yerevan leading a TUMO Studios atelier that combined product design, public space and play. We sat down with these two to discuss all of the above and everything in between.

Interviewer: How would you describe your architectural style?

Ghaith: Humble, raw, minimal. We make it a point to use organic materials and use them as they are with minimal interventions. You have to appreciate the material and let it be its authentic self.

I: Why minimal intervention? What’s the benefit in that?

G: In limiting what we paint, what we treat, we’re using the material in its rawest form; that means it’s usually imperfect which always lends a sort of spontaneity to everything. For example, once, we threw hot wax into iced water. The combination of those raw elements made wave and cloud-like forms which we later used to create a mold for resin and plaster. There was no way of knowing beforehand what was going to come out of the combo, but the fact that we’re using the materials in its basest form guarantees a singular product each time.

I: You’re part of a growing group of architects that refuses to skip the physical model-making stage of the design process. What advantages are there in that decision?

G: Things became much simpler with the advent of different types of software, in the production and even just the thinking process. But we’ve found that making the model lets you look at the material itself, explore it with your hands. You end up facing challenges that are similar to what you’ll see in the actual construction process. Working with our hands instead of just designing the model on the computer shows us elements and flaws that we otherwise can’t anticipate prior to building.

I: The process it takes to build something seems to be as important to both of you as the final product itself.

Jad: The process is pivotal. Innovation isn’t creating something magnificent at the outset of the project. It’s about sketching and making something, learning from it, building on it, and moving forward from there. By the time you get to the end of the process, you realize that you ended up with something that is nothing like what you started with.

I: And how do you reconcile that with the fact that you have a paying client who is looking to realize his or her own vision from the start?

J: The client will of course give us direction and certain restrictions and we make sure to adapt our design to fit those specifications.

G: We’re also consciously particular about which clients we accept. We reject a lot of clients who want us to do something a specific way. If it’s just not who we are we can’t take it on. When we’re in the thick of designing, Jad and I feel like kids playing — if we don’t get that feeling from a project, if we aren’t able to communicate our own style, then we can’t agree to it.

I: It’s interesting that the element of playfulness is so intimately connected to your process when the atelier you led at TUMO Studios dealt with designing a toy. Why did you choose that project?

G: We really feel that for design to be good, it has to be genuine and there is no one more genuine than a child. So, we wanted our students to go back to that raw and authentic feeling of childhood — forget what they’ve learned, forget images they’ve seen on the internet and just create and be as wild as crazy as their imaginations allow; you can do that with toys.

J: The goal is to rethink playfulness. We told them to go around the city, collect organic materials and come back to assemble something playful with those materials.

I: “Assemble something playful.” What does that entail, exactly?

G: It all started with words. Whatever words they could think of that related to playfulness for them. Then they had to draw a series of toy prototypes incorporating those words, all under a minute. We limited their time because we felt that that limitation forced them to get the most important elements of their ideas down on paper. From there, we limited them again by allowing them one primary material, clay, to bring their prototypes to life. With limited time and material, they were able to completely reimagine what playfulness was, but in a way that incorporated their own history and feelings into it as well․

Adding a Cornelian Twist to the Black Forest Cake